Ever notice that most Weimaraner people have more than one?!

If you’re here because you have multiples, I welcome you to the multi-Weim club!

I can’t imagine ever having only one, but if you’re considering going from a single Weim to double the trouble or maybe even a pack-o-Weims, the club comes with some Weim-specific caveats!

Do You Really Want More Than One?

Most people find the extra work worth it, but here are some things you should consider.

The most obvious one is that the cost of Weim ownership goes up with another Weimaraner around. Don’t forget that there are hidden costs that come with these dogs due to their naughty nature! The mess grows exponentially with each additional dog, just like the cost does.

You’ll have more muddy paws trashing the house, more drooling water, more poop to pick up from the lawn, more toys strewn around the house, and so on.

Training and socializing should be done separately. The ability of each dog to reach their individual potential depends on you spending quality time with each of them separately.

There are no short cuts here! Even having one in a crate as you train the other one can be a problem if your dog’s focus is on the other dog, not so much you.

This is especially true when you are training puppies because it is during this critical time when focus and attention is a large part of establishing an individual relationship with your Weimaraner.

Your Time and Energy

Double the work? I don’t know the exact formula but it’s definitely exponentially more time and work, the more Weims you have.

Two dogs close in age are usually more of a challenge than if you had two dogs with a gap in age. Littermates are about the worst multi-dog scenario you can have.  They even have a term for it, “Littermate Syndrome” and it refers to littermates overly bonding to each other when they are raised together.

Having two dogs close in age, and especially puppies, means that the dogs’ deep bond can hamper the individual’s ability to learn how to socially interact correctly with humans and other dogs.

On the other hand, when you have vastly differing ages, you will have different things to watch for, such as your old dog correcting a puppy too harshly, or a younger dog pestering or even injuring the older one when playing.

You’re the boss, and these are your dogs. No matter the age, don’t rely on the other dog to do your duties. Don’t rely on littermates or two young Weims to entertain each other. On the same token, your old dog or the “alpha” dog should not be doing your work; he may actually need support from you as he ages.

It takes some planning to keep dogs separated when you need to. Have you noticed that planning is a theme yet???

Scheduling aside, most owners have learned that it’s easier to manage multiple Weims if there are double the number of crates around than the number of dogs. Having crates around for quick separation is essential. (One of your Weims is throwing up and the other is trying to eat it! Where’s that crate?!).

These can be many and usually involve a coveted resource, like food, treats, or you. Any high arousal situation can cause fights due to redirected frustration.

Lip licking, staring, tight posture, yawning, etc. are signs to watch for. Fights don’t happen “out of the blue” and especially not among housemates!

Feeding times can be very high arousal, and many people who have multiple dogs simply feed their dogs in their crates to avoid this.

Food isn’t the only resource that can cause high arousal situations. A toy can be the impetus. Or maybe you’re the impetus. You need to pay close attention. Life is more complicated with more dogs around.

Feeding Off Each Other

Barking and prey behavior are amplified when there are multiples. It’s a pack behavior thing.

I’ve had one of my dogs bark because another one was barking, and it was obvious that he had no idea why; he was just following the leader. Pretty funny, but if I lived in an apartment I don’t think I’d be laughing.

Same goes for prey behavior like cat chasing, or even ganging up on other dogs.

Feeding off each other is really another high arousal type situation and the same rules apply. Be attentive to your Weim’s body language and be prepared to handle whatever may arise.

If there’s only room for one Weim in the bathroom with you, you’re going to be very crowded in there as every single one jostles for position to be the one leaning against you. Remember, you’ll now have multiple shadows. You may not find it as endearing as when you only had one.

Crates are my best friend when it comes to managing my multi-Weim household. Crate training seems to go a lot easier when you can train them together, but what happens when one needs to go to the vet or otherwise needs to be separated from the other? Cue psychological distress on top of whatever physical ailment caused them to go to the vet in the first place.

Crate train separately. A crate is usually needed because you want to separate your dogs for whatever reason, so why would you train them to crate together all the time? In fact, rotate all of them in and leave one out which offers a bonus side benefit – You’ll be forced to interact with only one dog.

This can be a real challenge depending on how well trained and how old your Weims are. Two well behaved dogs can work well, but no matter how well behaved three dogs are, it gets more difficult simply due to the number of hands you have.

It’s just that much harder to go with more than one dog. Multiples mean more than one potty outing. It becomes a real thing when your hotel room is upstairs, and you have four dogs you need to potty in the middle of the night!

Rules of Thumb for a Multi-Dog Household

Most behaviorists and breeders recommend:

My personal magic number is two and a half. Half??? How does that work, you ask? Three is good when one of the three is an older well-trained dog. This is the dog that reads your mind, knows how to behave and the two of you are so in-sync, it’s nowhere near close to having a puppy or adolescent dog. So I’m counting ol’ reliable as a half.

Two young dogs are definitely about double the work, but three young ones starts feeling like quadruple the work. Four or more just feels like you might as well have a dozen. And if your reaction to that last statement is, “What’s wrong with a dozen Weims?” consider yourself committed! (To the breed, or to the insane asylum or both!) 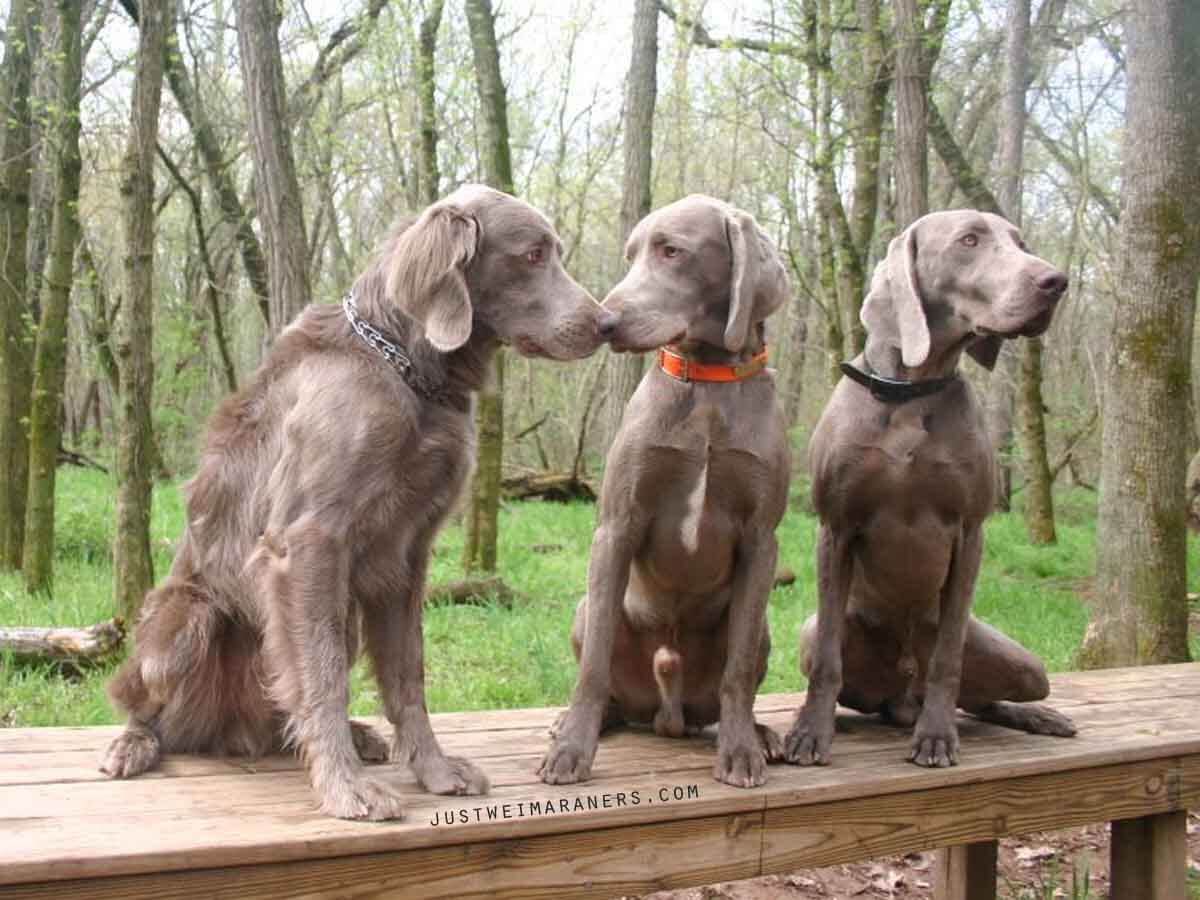 The short gray coat may be considered the hallmark of the Weimaraner breed, but their coats also come in different colors, length & markings. 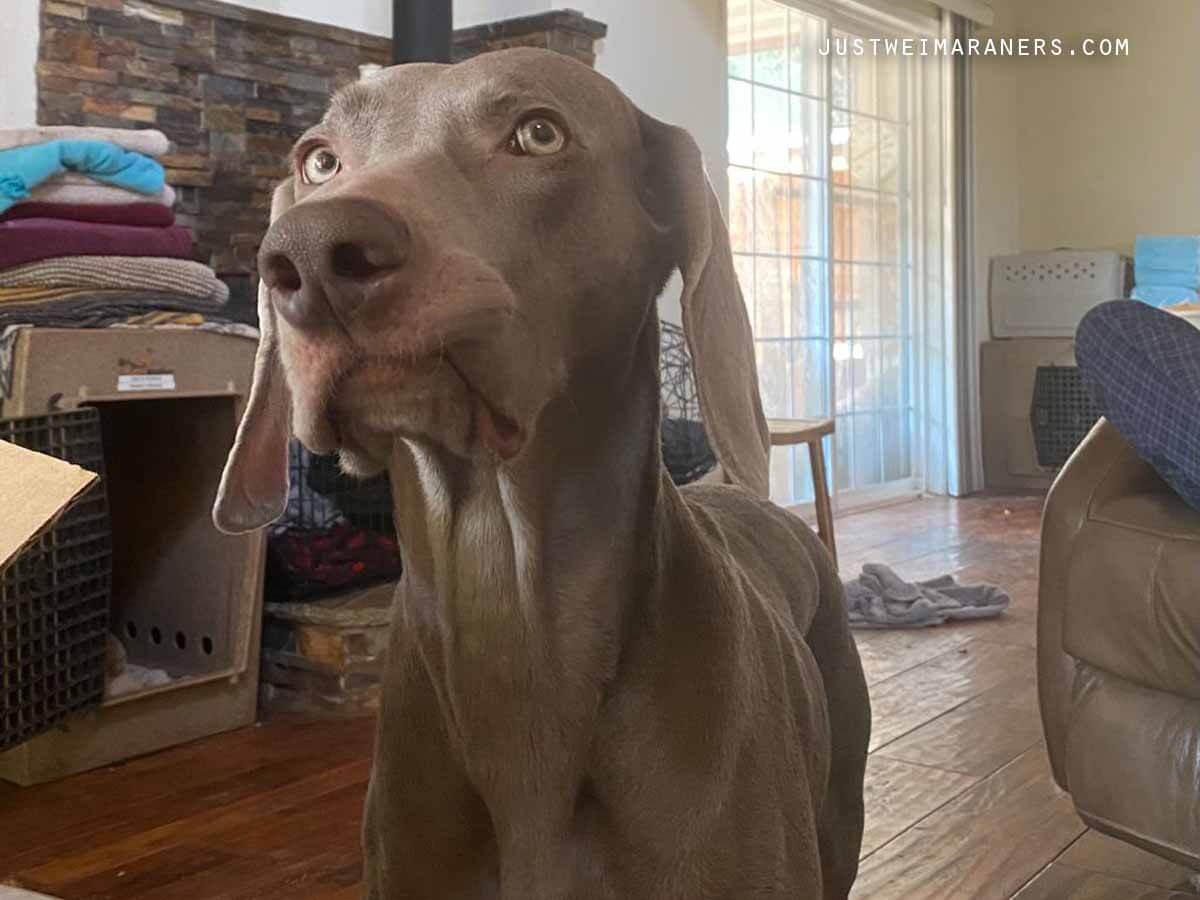 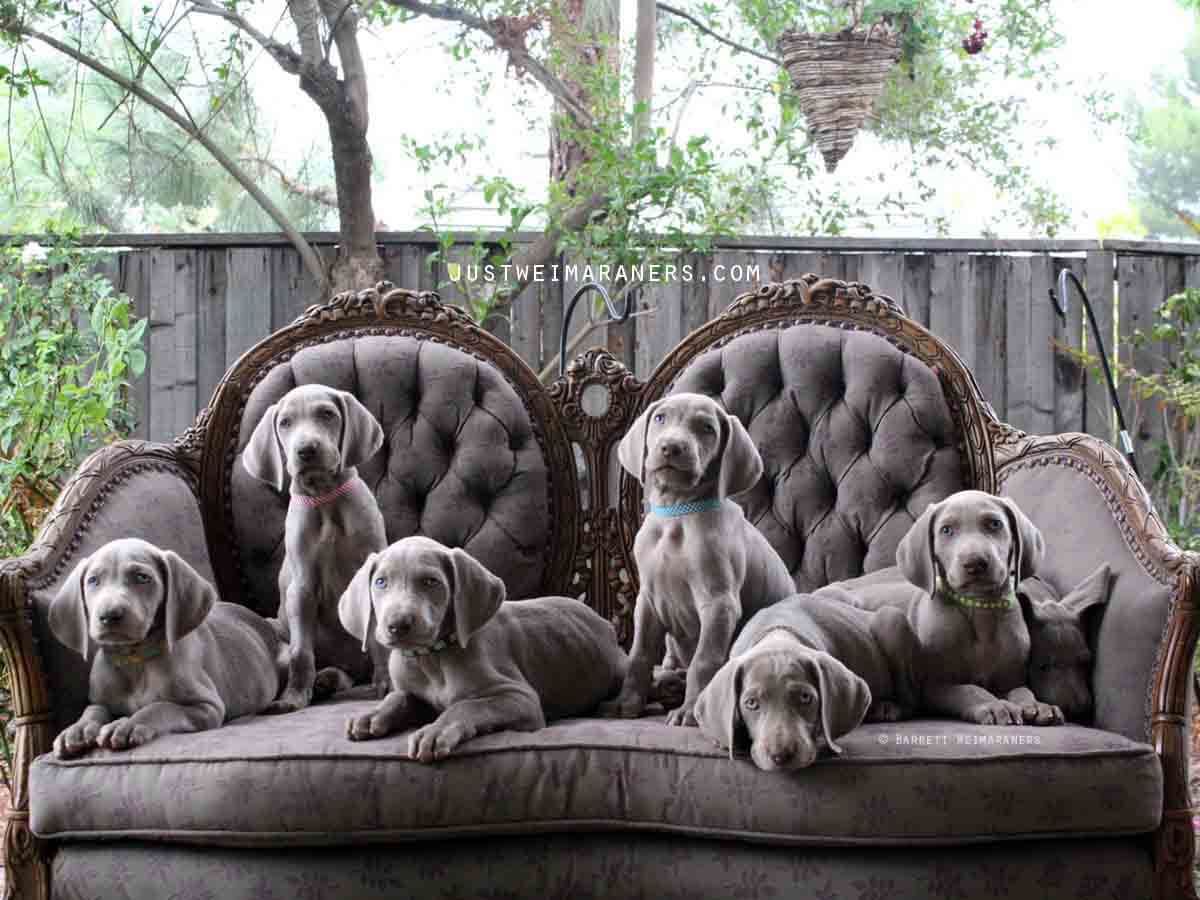 There is no right answer to how big your Weimaraner will get, so I polled over 100 Weim puppy owners to see what the averages were.